Auckland Mayor, Phil Goff gave the order to start up the TBM at a launch ceremony at a construction site next to Māngere Wastewater Treatment Plant.  At the bottom of the 40-metre-deep launch shaft, the TBM’s cutterhead began rotating, titanium blades slicing into the earth.

“This is a great day for all of us who care about Auckland’s water quality,” he says.

“When complete, the Central Interceptor will drastically reduce overflows into our waterways and harbours, improving water quality and creating a legacy of clean, safe, healthy beaches for our children and grandchildren to enjoy.

“Residents who live near Lyon Avenue in Mount Albert or Haverstock Road in Sandringham will particularly appreciate the significance of this project. For years, heavy rain has overwhelmed the network, creating overflows into their streams.

“By 2025, the Central Interceptor tunnel will stop over 80 per cent of wastewater overflows from the Western Isthmus by storing and conveying flows to the Māngere Wastewater Treatment Plant and those communities can enjoy their waterways once more.”

Hiwa-i-te-Rangi will travel north underground, crossing the Manukau Harbour and finishing her journey at Tawariki St, Grey Lynn. Two new link sewers will connect with the main tunnel. The first link sewer to be completed will travel from May Road to Miranda Reserve in Avondale. The second will start near the Mt Albert War Memorial and travel 1.5-kilometres to the Ōrākei sewer main.

The Central Interceptor tunnel is designed for a 100-year life span to provide for Auckland’s population growth. The project is being delivered by Ghella Abergeldie JV for Watercare and between 400-600 staff are currently working on eight sites across the city.

Watercare’s chief executive, Jon Lamonte says the project is on track for completion in 2025 despite the challenges of the COVID-19 global pandemic and shipping delays: “I am tremendously proud of everyone involved. Infrastructure projects of this size demonstrate just how well we operate.

“The Central Interceptor team have shown incredible resilience and agility to overcome tremendous obstacles. I’d like to pay special tribute to the foreign workers among our team who’ve had a particularly tough time, being separated by families or who’ve lost friends and acquaintances to Covid-19.”

Hiwa-i-te-Rangi is one of the Matariki stars to which Māori would send their dreams or aspirations for the new year. The name was chosen by students who attend school along the route. Designed and assembled by Herrenknecht AG in Germany, it was shipped to Auckland in November.

The front shield was the first section to be hoisted by crane into the launch shaft in late June. In recent weeks, remaining sections have been assembled, connected to power cables and undergone testing.  As the journey progresses, gantries will be added to create a long train with an overall length of 190m. Soil conditions will dictate the TBM’s progress, which is likely to be 12-16m per day.

Teams of highly skilled operators will work underground. Lasers will guide the route of the TBM, so that the direction is millimeter accurate.

An Earth Pressure Balance method of construction is being used.  The front of the machine is pressurized to keep groundwater at bay. The TBM is powered by thrust cylinders, which press the cutterhead into the ground. Spoil passes through openings in the cutterhead, along a screw conveyor and conveyor belts, which tip into muck skips. The muck skips are sent down the tunnel by electric locomotive and are removed by crane. Most of the spoil will be deposited at nearby Puketutu Island, where Watercare is carrying out a restoration project on a former quarry. One day the island will be returned to the people of Auckland as a park.

Once completed, the Central Interreceptor will be New Zealand’s longest bored tunnel.  Providing both storage and conveyance, it will hold 226,000m3 of water – the equivalent of 90 Olympic-sized swimming pools and act as a buffer for Māngere Wastewater Treatment Plant in times of high flow.

The public can visit the Māngere site and see the TBM at the bottom of the launch shaft at the Greenwood Rd site on Sunday (1 August). Free self-guided tours will run from 10.30 am to 2.30 pm. Visitors are asked to wear flat, enclosed shoes and warm clothing, which includes long pants and long sleeves. Reservations are made on a first come, first served basis. Tickets can be booked here. 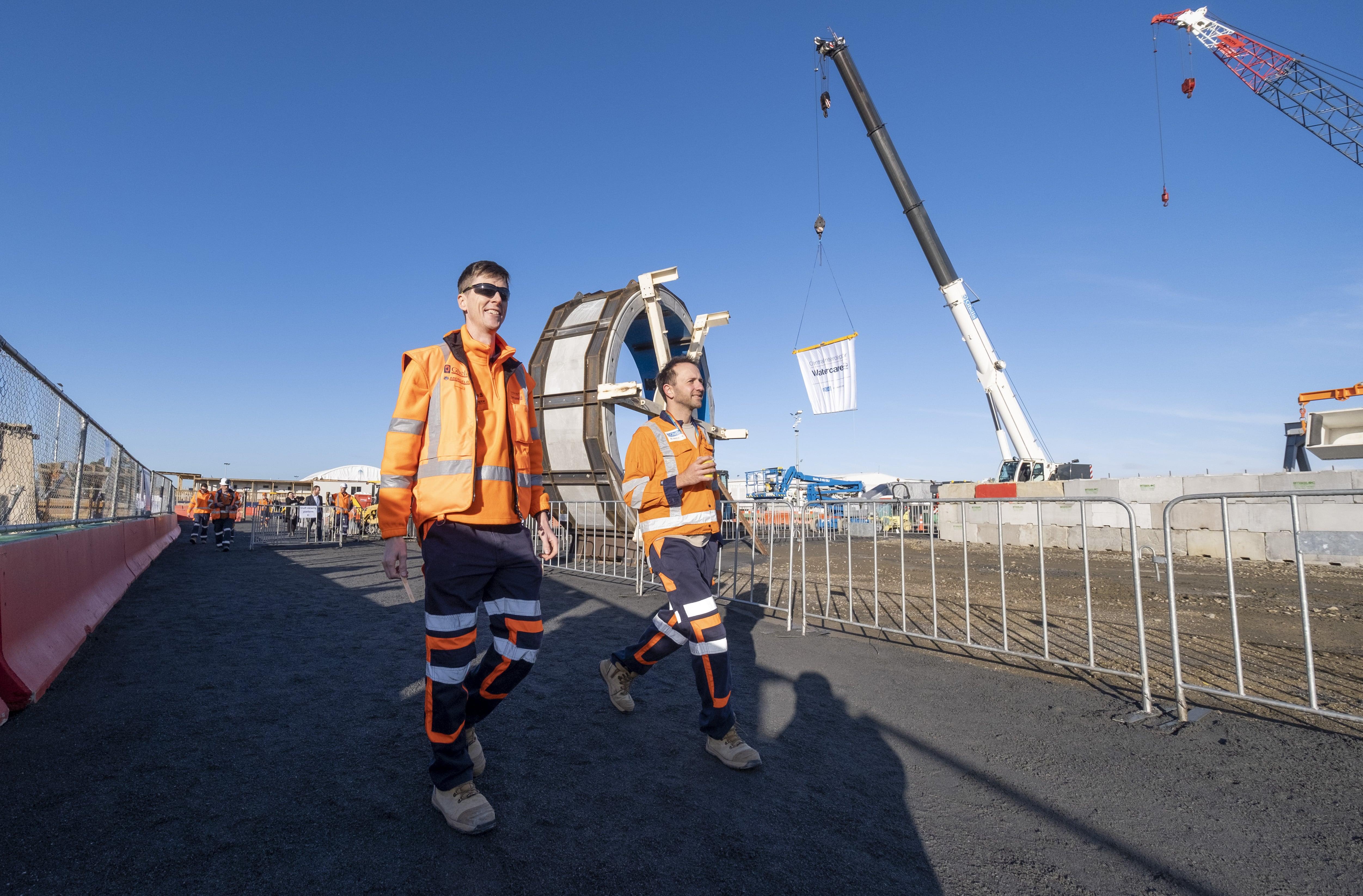 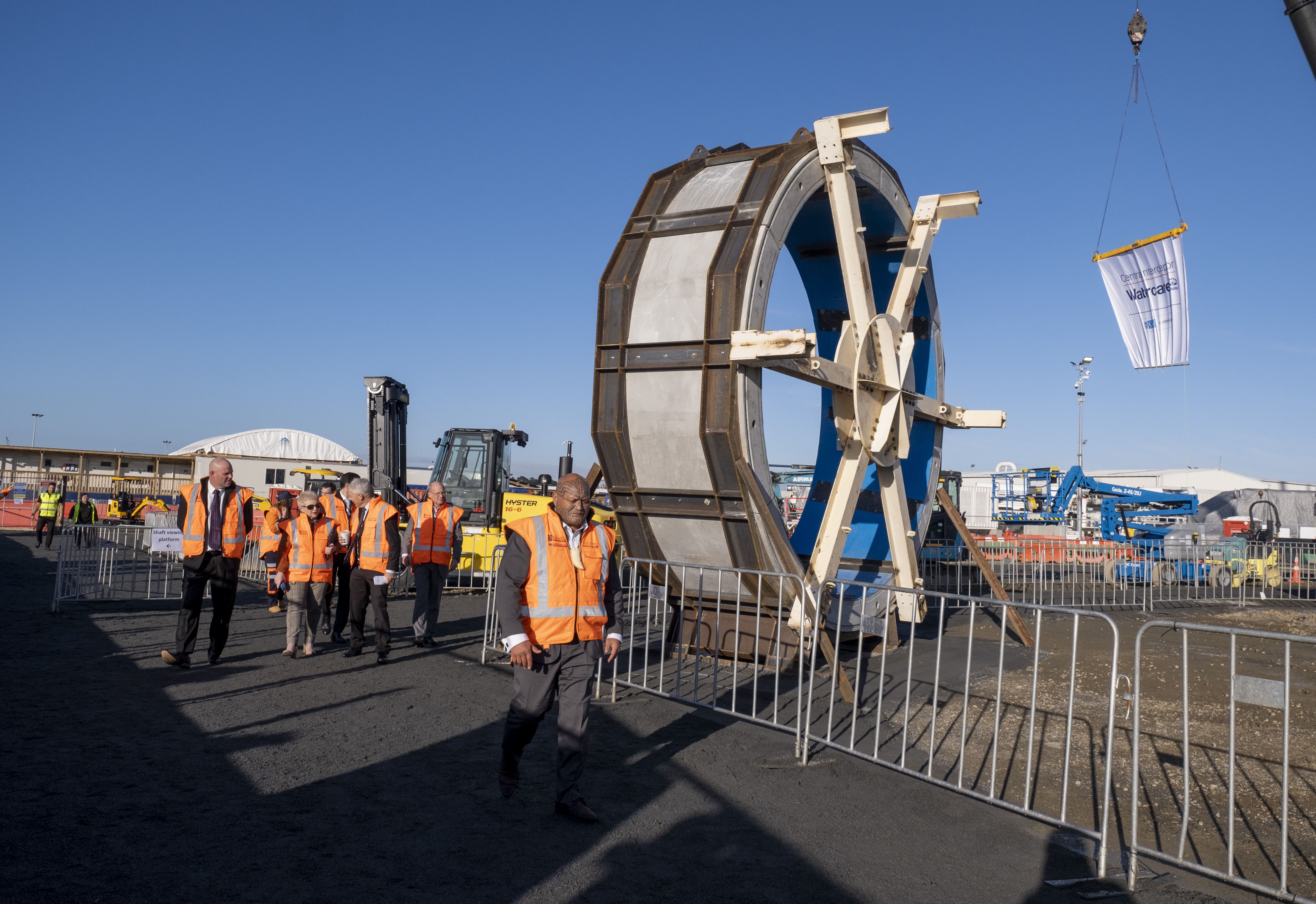 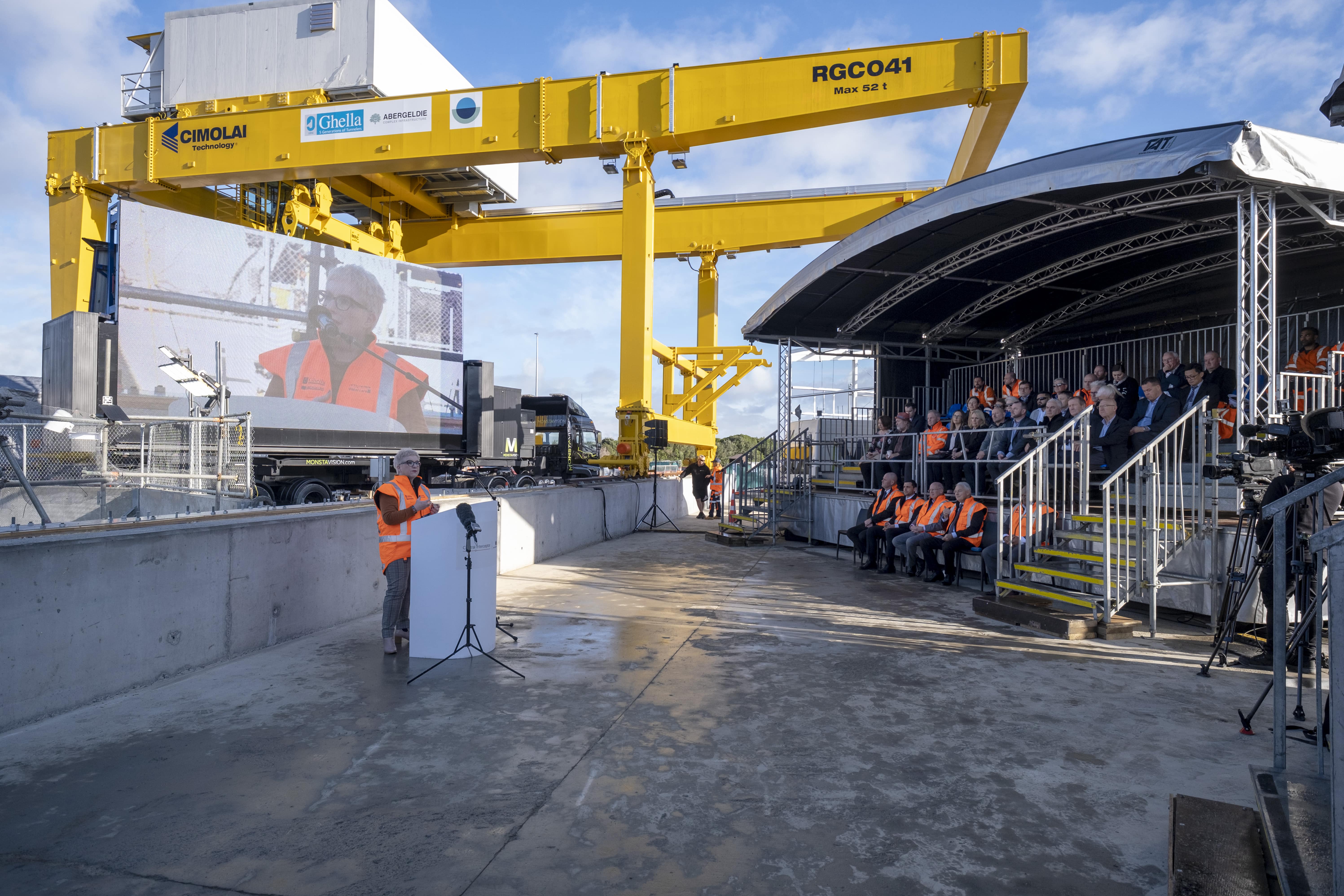 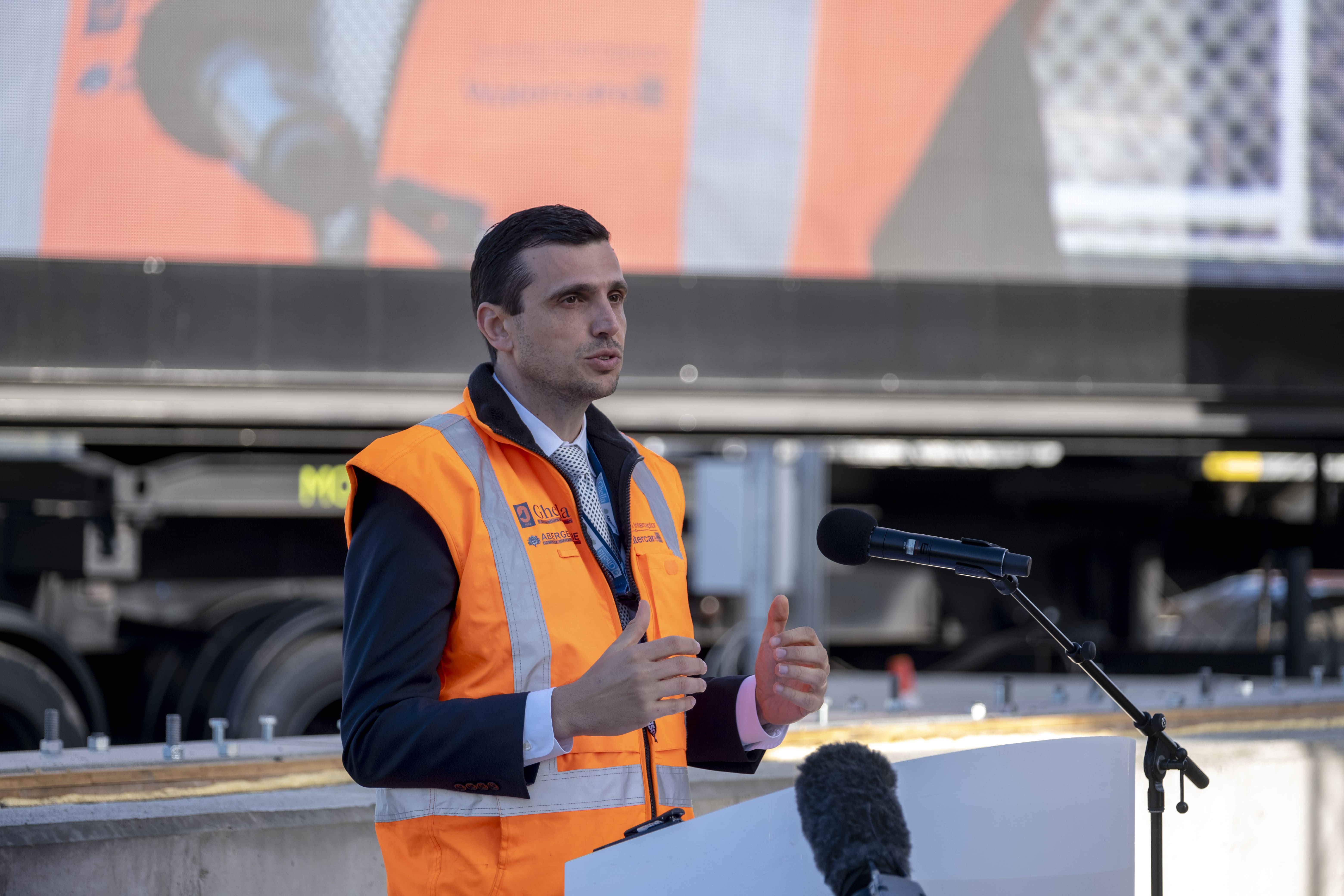 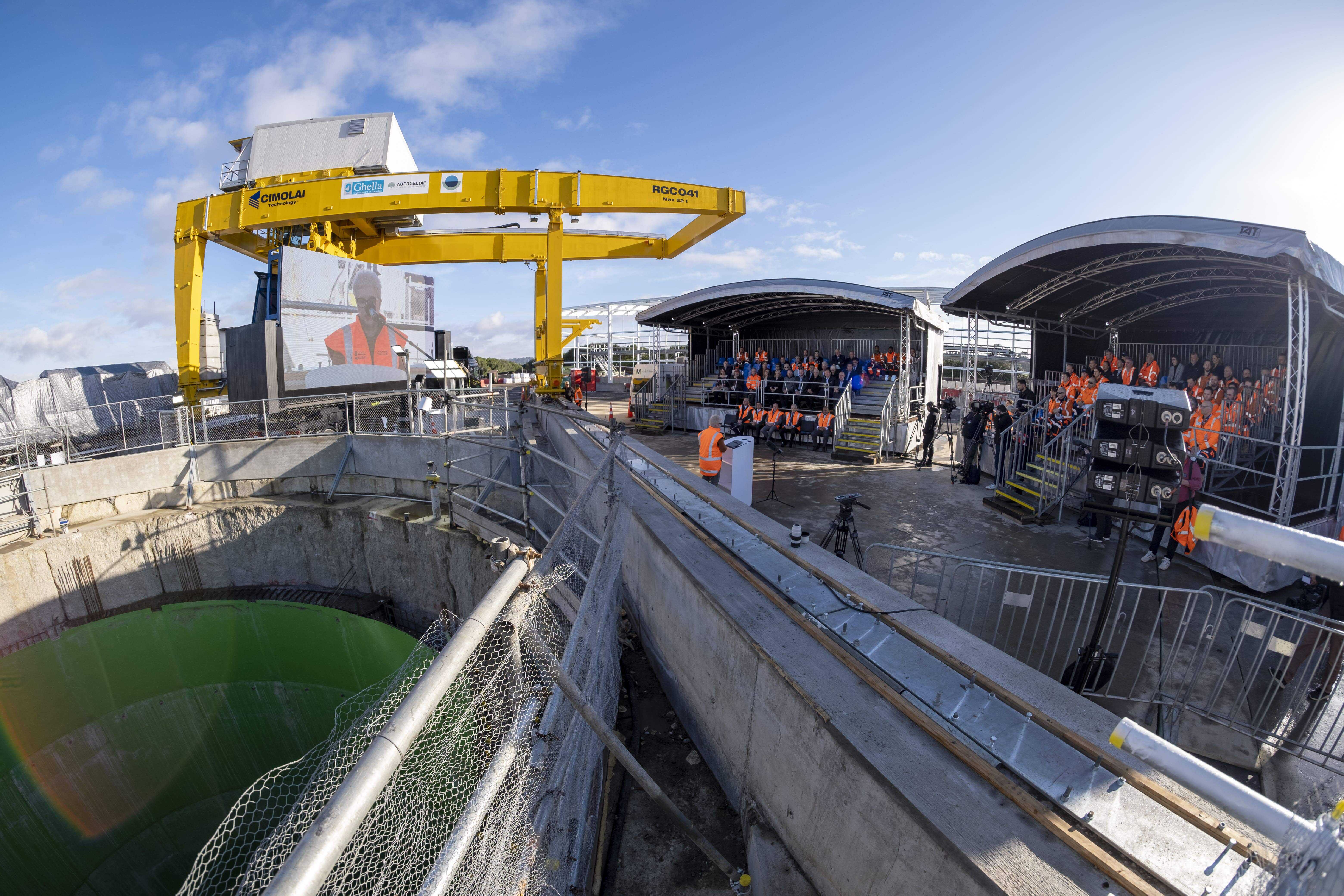