The Norwegian National Rail Administration today signed a NOK 8.7 billion (€1 billion) contract with a consortium formed by ACCIONA, a global infrastructure and renewable energy group, and Ghella, an Italian construction company with an important experience in underground works, to design and build the 20km twin-tunnel of the Follo Line Project.

This is the second, and largest, of four EPC contracts for the Follo Line Project, currently the largest infrastructure project in Norway. The twin tunnel has been designed for high-speed trains of up to 250km/hour, and will be the longest railway tunnel in Scandinavia when completed. 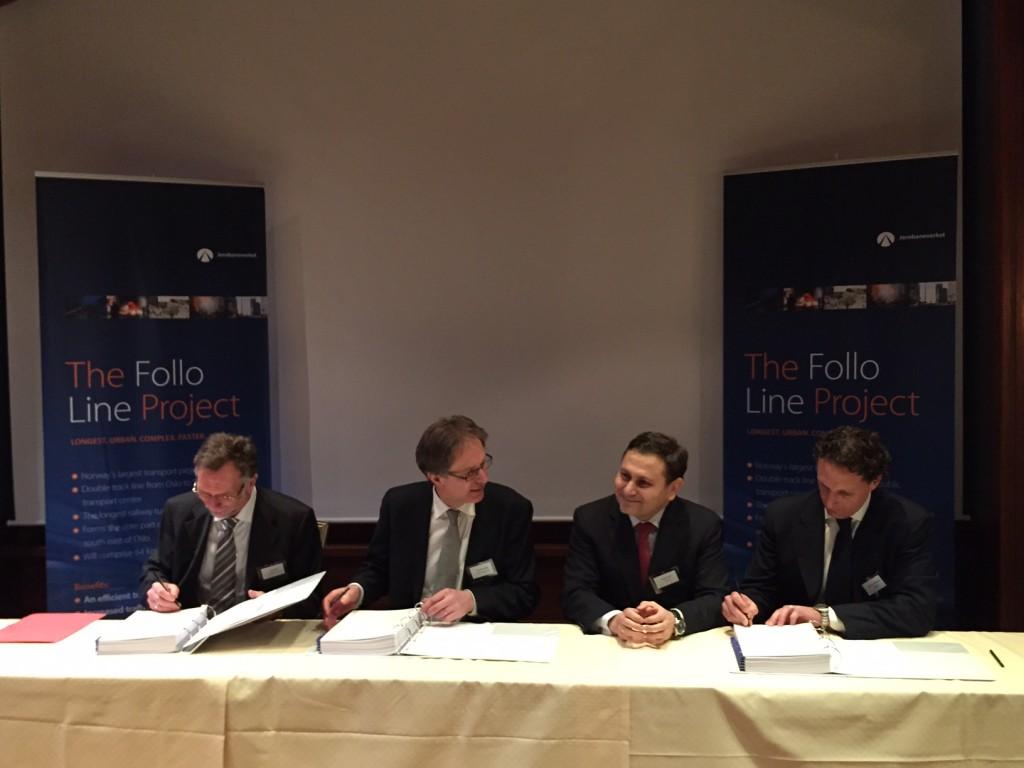 The ACCIONA-led joint-venture was chosen following an international bidding process that attracted the interest of some of the world’s leading contractors.

Luis Castilla, CEO of ACCIONA Infrastructure, said: “ACCIONA is looking forward to working with the Norwegian National Rail Administration to deliver a world-class, high-speed rail infrastructure for Norway. This is ACCIONA’s first project in Norway, and we are proud to be bringing our international tunnelling expertise to what is clearly a flagship project for Norway and Europe.”

Enrico Ghella, CEO of Ghella, said: “We are proud to share the trust of Norway’s National Rail Administration with our long term partner Acciona. We are both strongly committed to add the Follo Line tunnel to the outstanding success we have reached in the last 15 years together.”

ACCIONA and Ghella will bring their extensive tunneling experience to the Follo Line Project. They are currently working together on the Legacy Way twin tunnel in Brisbane, Australia, and have won awards for the Australian project’s environmental stewardship as well as international daily, weekly and monthly speed records for tunneling machines.

In Norway, the tunnel works will include the blasting of larges assembly halls for the tunnel boring machines (later to be utilized as an underground rescue area), rescue tunnels, an escape tunnel of 2.7km in length, and two transport tunnels each of 420m in length. The joint-venture will also perform all the railway installations, with the exception of the signal system.

The mega project is executed by the Norwegian National Rail Administration on behalf of the Ministry of Transport and Communications.

ACCIONA is one of Spain’s largest corporations. It operates in infrastructure, energy, water and services in over 30 countries. Its corporate motto “Pioneers in development and sustainability” reflects its commitment — across all its activities — to contribute to economic growth, social welfare and the protection of the environment. This effort has been recognized through its inclusion in the Dow Jones (DJSI) and FTSE4Good sustainability indexes. ACCIONA is quoted on the Ibex-35 stock index, has a 33,000-strong workforce and posted revenues of 6,500 million euros in 2014. www.acciona.es

GHELLA Founded in 1894, Ghella is an Italian Construction Company mainly dedicated to the underground works. The Company has gained a particular experience in underground works using mechanical and conventional excavation methods. Ghella has executed several projects for the construction of subways, railways, roads and hydroelectric plants and diversifies his activity also in the field of Renewable Energies. The main areas of operation are located in Italy, Oceania, Far East, Europe, Central and South America. www.ghella.com